Dumplings, soju, grilled ribs, stews, chicken and lots of kimchi were on the table this week. It took us a few weeks to start to get the hang of Korean food, discover what we love, and what we don’t. For Part Three of our food journal, we mostly concentrated on restaurants around our neighborhood, Suyeong and Gwangalli Beach, but these dishes can be found on just about every corner of Busan. 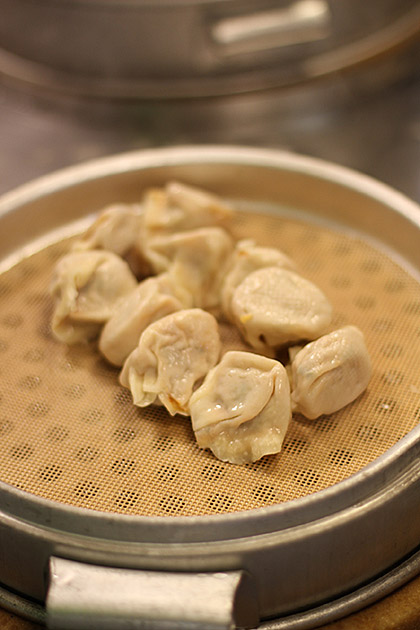 Kimchi is the national dish of Korea, and people here eat it constantly. Generally, the spicy fermented cabbage is consumed straight out of bowls, but it can be prepared in a variety of ways. For a quick dinner one night, we stopped at a tiny restaurant along the Gwangalli Beach and ordered ten kimchi dumplings. After devouring them in ten bites, we almost convinced ourselves to go for another round. [More Pics] 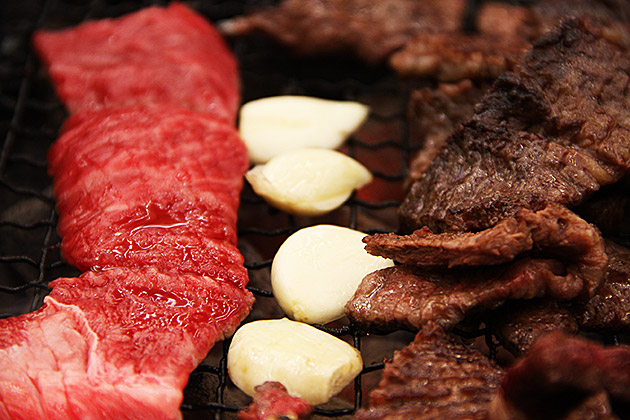 For an early Saturday dinner in Nampo-Dong, we sat down at a restaurant called Busan Sutbul Galbi (부산숮불갈비) after having seen the commotion inside. The specialty here, and the most expensive thing on the menu at $22 per person, was So-Galbi: beef short ribs marinated in soy sauce and grilled at the table, and served with approximately six thousand side dishes. We’re starting to get comfortable enough with grilling that we don’t require assistance from the waitress — tonight, I only dropped a couple pieces of the meat onto the coals, which constitutes a success, in my book. [More Pics]

Approx. location on our Busan Map 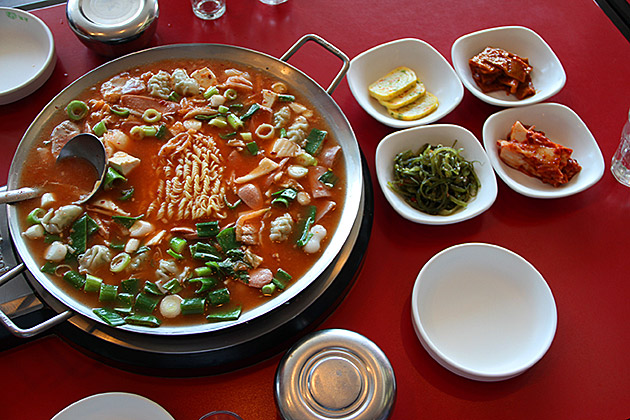 Budae Jjigae, also known as “Army Base Stew”, is an inadvertent relic of the Korean War. During the fighting, when Koreans were able to grow very little food of their own, resourceful chefs used the surplus found around US Army bases to create a rich stew filled with American staples like hot dogs and spam. Budae Jjigae has remained a popular meal ever since, and is now served in a variety of ways. Ours came with ramen noodles, rice balls and a ton of veggies. Delicious. [More Pics]

“Service” is rapidly gaining ground on my list of favorite words. In Korean restaurants, it refers to the freebies which are occasionally set down at your table, and often include some great dishes you might not ordinarily try. At the popular Japanese restaurant Takedaya (다케다야 – location) the cook came out to say hi and offered us a couple free plates, one of which was flakes of dried bonito, curling and dancing around on top of a hunk of fried tofu. They looked alive, but were actually just cut so thin that the steam made them move. Our main dishes of Kake-udon and Bugake-udon were fantastic as well. [More Pics]

Location on our Busan Map 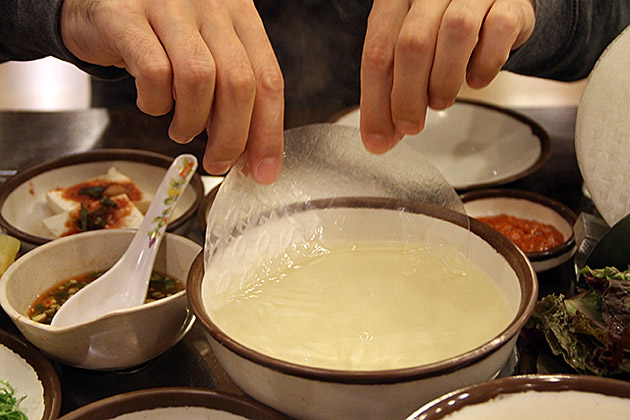 We sat down on the floor at Tagguba (다꾸바) and, while working on a bottle of soju, watched our waitress set up the grill, carry three full plates of food (duck, veggies, mushrooms) to our table and then cooked them to perfection, taking care to continuously drain the fat. The hard part done, all that was left for us to do was dunk rice paper in water and create delicious mini grilled-duck rolls with the sauces and condiments spread across our table. Did we love it? So much so, that we went back with friends the very next week. [More Pics] 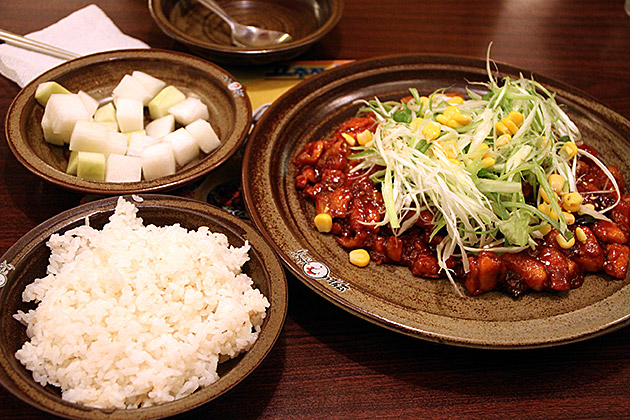 This meal at chain restaurant Mubwatna (무봤나 – location) had the benefit of being familiar to our western palates. BBQ garlic chicken, served with rice and chicken? That’s nothing to fear, in comparison to say, spicy octopus bibimbap. Which is perhaps why we chowed it down in about fifteen seconds flat. Mubwatna concentrates exclusively on chicken and the franchise near Gwangalli beach is almost always crowded. I occasionally enjoy challenging my culinary comfort level — but let’s not forget the importance of that word occasionally. 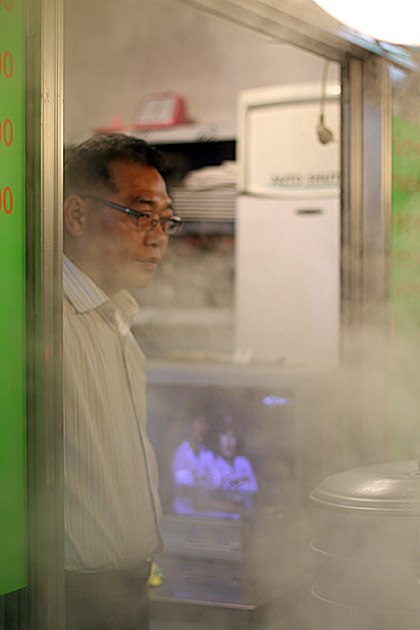 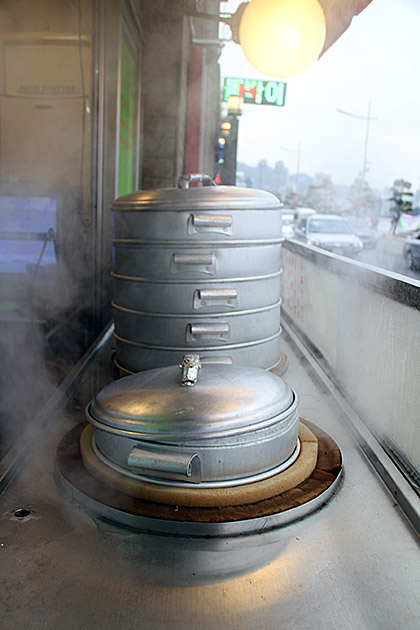 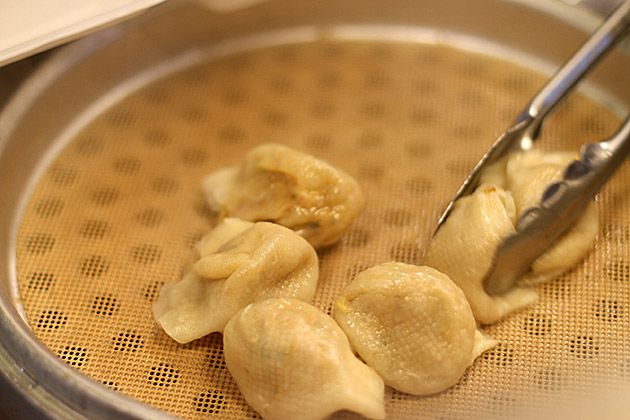 More Pics from the Galbi Grill 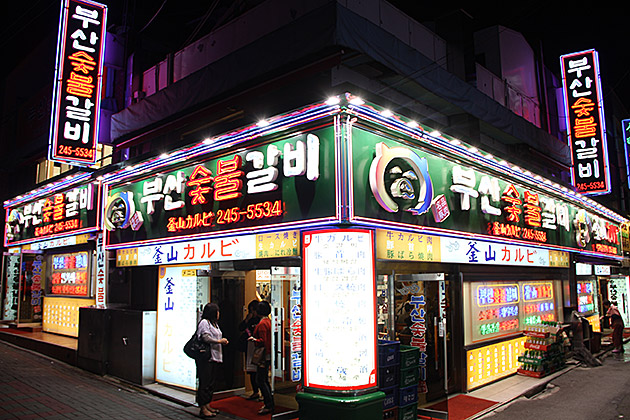 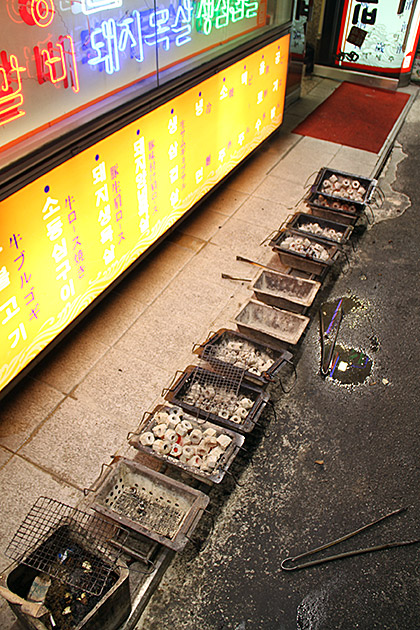 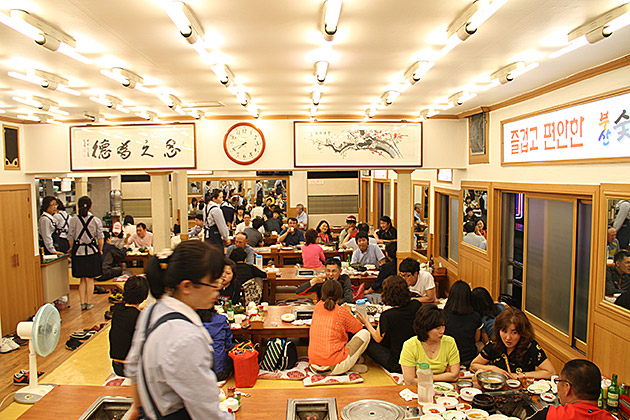 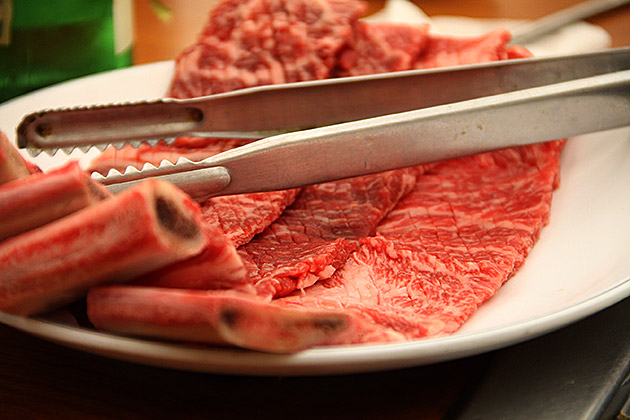 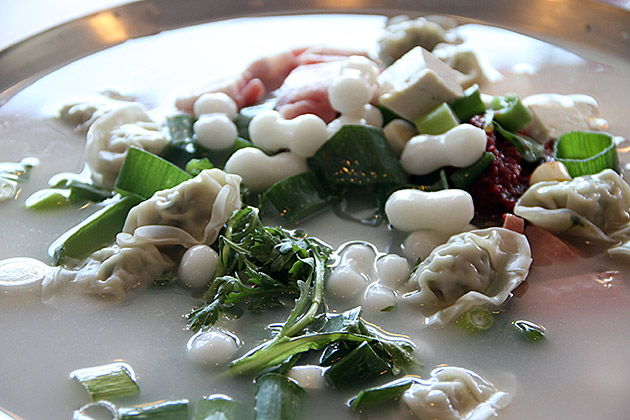 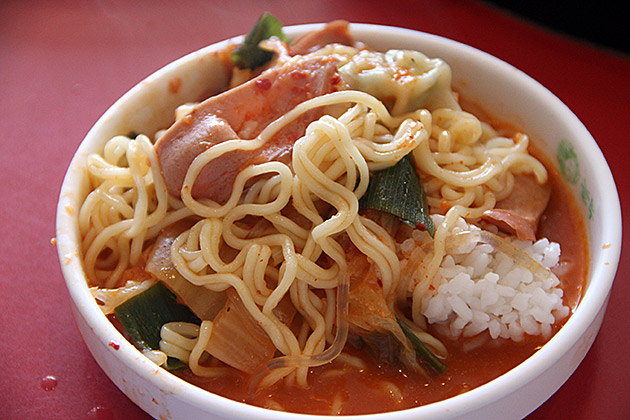 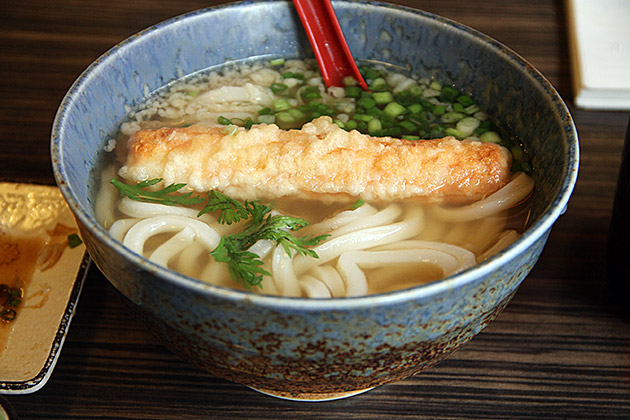 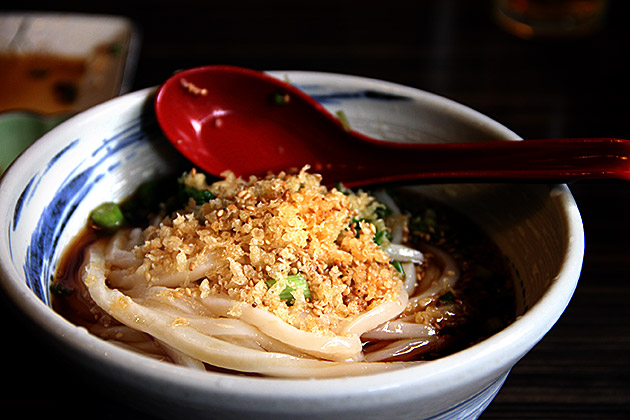 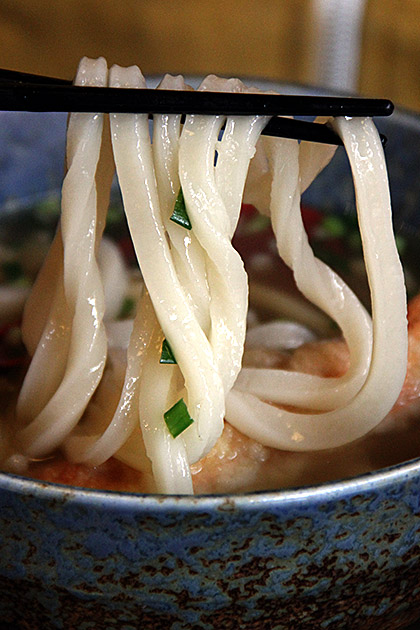 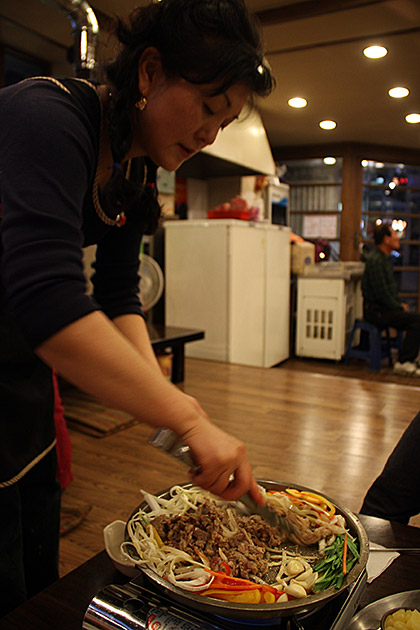 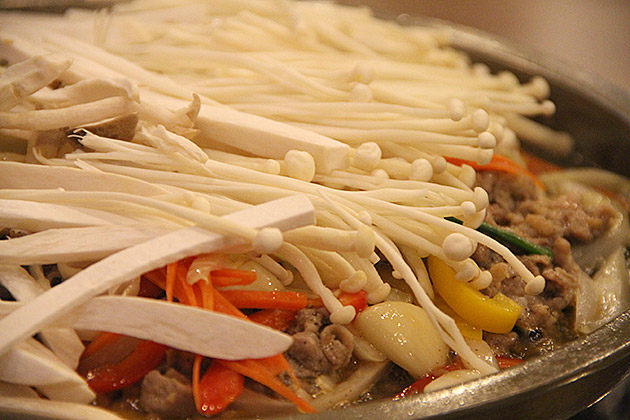 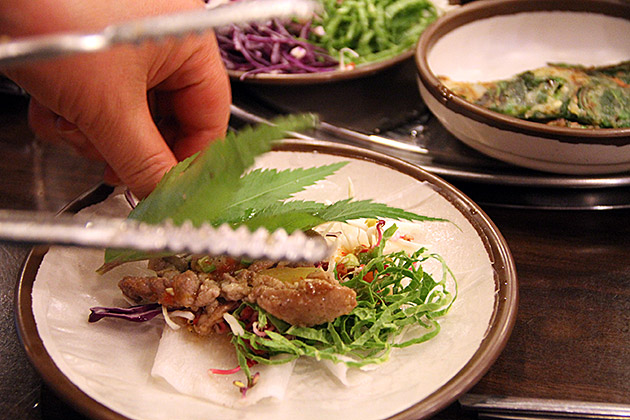